Things to do in Ecuador That You Can’t Miss!

Ecuador is a South-American gem full of history and natural wonders, making it the perfect destination for those seeking adventure and fun. Make sure you know all the best things to do in Ecuador while you’re here. 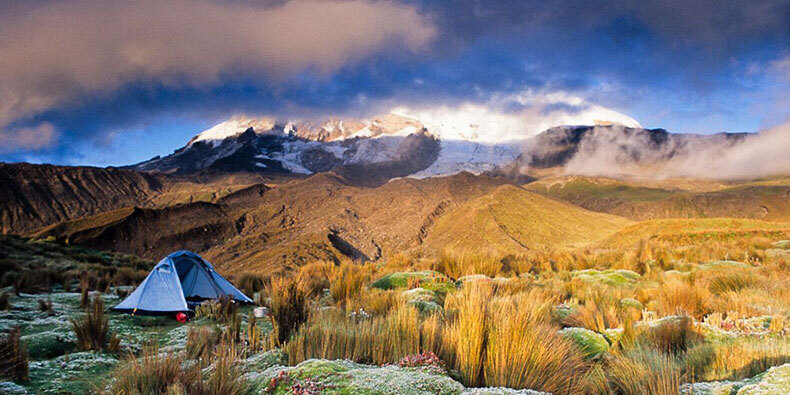 Among all the tourist attractions, the most popular are:

But some places may have gone unnoticed, and you definitely can’t miss them. These locations are worth knowing because of their cultural heritage, natural landscapes, and the activities they have to offer.

We have gathered ten tourist attractions in Ecuador that probably nobody has heard of, and we believe they are going to make your trip more exciting, diverse, and safe.

25 kilometers away from Quito, in the Pichincha province, you’ll find the natural wonderland of Pululahua Geobotanical Reserve. Pululahua is the only protected area in Ecuador named Geobotanical Reserve because of its diverse flora and fauna. The altitude of the reserve varies from 1,600 to 3,256 m.a.s.l. In this magical place, you will find a small village sitting on top of a volcano crater, this one being the second inhabited crater in the world.

Every afternoon, the village gets covered by clouds coming from the pacific coast, creating a mattress-like effect which you can appreciate from the Ventanillas Viewpoint. The way nature blends perfectly with this small village will honestly captivate you!

In the Pululahua Geobotanical Reserve you’re allowed to camp, trek, mountain bike. Although many tourists decide to visit the most recognized places, we believe this is a must-go destination that you cannot miss!

The Tungurahua province in Ecuador has many magical places to visit and one of them is the Manto de la Novia Waterfall, inside the Llanganates National Park, 11 kilometers away from Baños. This region is well known because of the different activities and not-so-touristy places they have to offer, being one of the best destinations to visit in Ecuador.

Manto de la Novia Waterfall is the perfect place to get away from the noise of the city and enjoy the adventurous and beautiful destinations Baños has to offer. 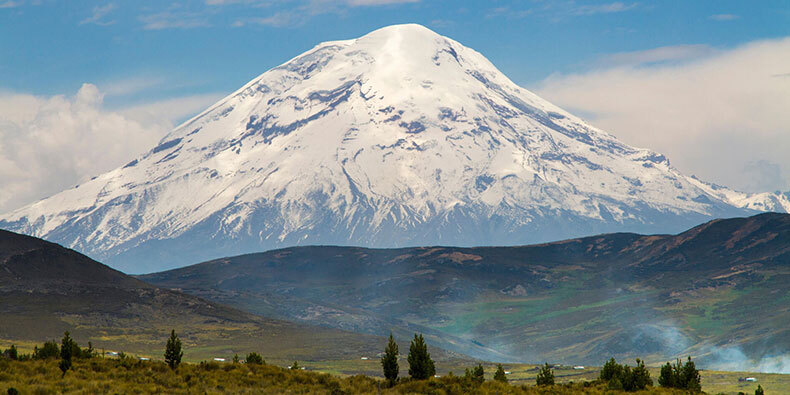 Among all things to do in Ecuador, the Chimborazo Volcano, located at 6,263 m.a.s.l. is one of the highest volcanoes in the world to visit It surpasses the Cotopaxi Volcano by 366 meters, and makes it one of the world’s closest points to the sun. This volcano is near Riobamba city, and it would take about an hour and a half to get to the base of the volcano by car.

The level of difficulty of the trek to the Chimborazo Volcano is very hard, recommended for experts only, and the companion of a guide throughout the trek is mandatory. But, it is possible to go by car to an accessible area, the Carrel Refugee, located at 4,800 m.a.s.l. from where you’re going to be able to see the marvelous Chimborazo. 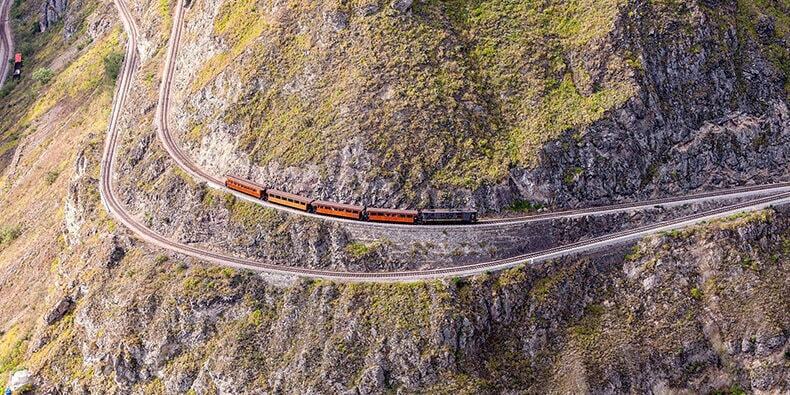 The Nariz del Diablo is a nose-shaped mountain located in the Alausí region at 2,346 meters above the sea level, to overcome the steepness of this mountain, they made the train rails go in a zig-zag way. By far, this has become one of the best things to do in Ecuador throughout the years!

These train rail tracks were inaugurated in 1901 and are the greatest engineering work in Ecuador.

It has been a key destination for those who love adventures and are not afraid of heights since most of the time you are at the edge of the abyss. The train ride lasts about 2 hours and 30 minutes (one way) starting from the train station in Alausí, which would be 12.5 kilometers from the starting point until the final station.

In 2002, Cajas National Park was named Wetland of International Importance because of its diverse flora and fauna, and in 2013 UNESCO declared this park as El Cajas Solid Biosphere Reserve.

Cajas National Park allows camping and trekking activities, but a guide is mandatory for some parts of this national park. This natural wonder in Southern-Ecuador is the perfect not-so-known destination for those who love nature and photography. You will feel enriched with the ancient energy of the Andes mountains in this part of the country.

The Ingapirca fortress is located 90 kilometers away from the city of Cuenca, inside the Cañar province. It is an Inca structure built in the early XVI century with the purpose of an observatory of the sun and the moon.

The Ingapirca Archeological Complex altitude is 3,160 meters above sea level. Its name means The Wall of the Inca in Quechua.

It is one of the primordial things to do in Ecuador. Although this place is not recognized as it’s supposed to, the construction of this archeological site is of great importance because of the history it shares.

The Incas invaded the Cañaris community and forced them to join their army. Then both cultures worked together to build the Ingapirca fortress. In this archeological complex, you can appreciate how both cultures merged their architectural knowledge during the construction.

Watching these cetaceans swimming across the Ecuadorian sea will leave you stunned! On a sunny day, you will see the humpback whales jumping and dancing in the sun, something that you can’t miss if you are traveling through Ecuador during these times of the year! 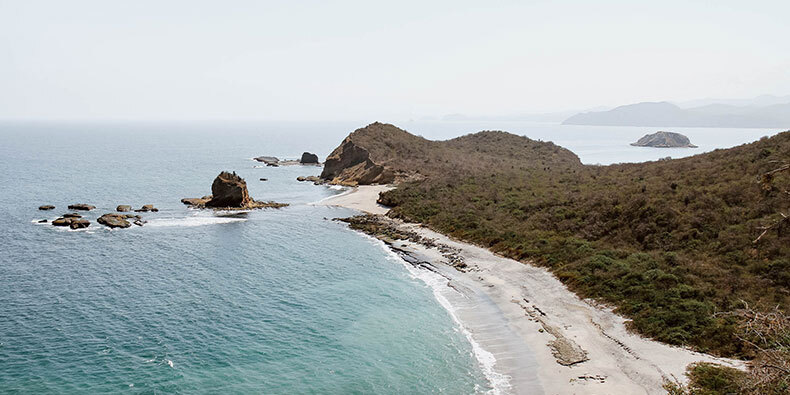 There is a magical place 1 hour away north from Montañita called The Frailes Beach, it has crystallized and turquoise waters, which will make you fall in love with this isolated and perfect location. This beach belongs to the Machalilla National Park, and the interesting part of this area is the fact that you can easily walk and find two more beaches and a viewpoint to the whole national park and coast.

As you may know, Montañita is one of those places that makes you want to stay forever. This Bohemian-like city will captivate you with its parties, gastronomy, and most importantly, the beaches.

Montañita is home to surfing in Ecuador, many of its beaches have been the location for worldwide surfing championships, which makes it the perfect destination for those passionate for the sun, the water, and surfing. 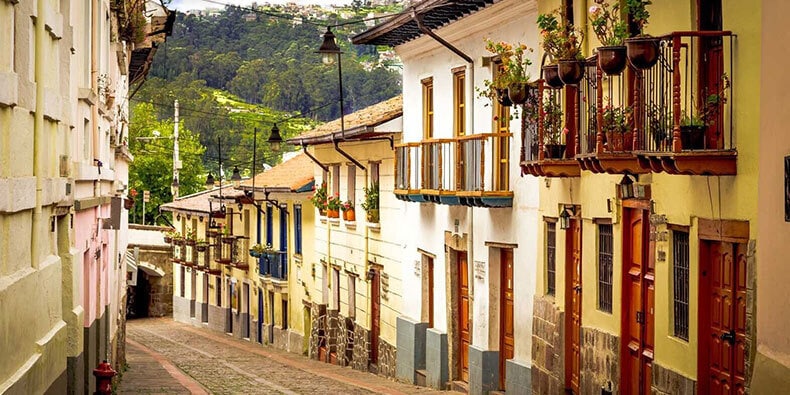 La Ronda is one of the most visited places inside the Historical Center in Quito, home to galleries, coffee shops, libraries, restaurants, and live street artists, located a few minutes away from Plaza de Santo Domingo.

Nightlife in La Ronda is as exciting as you can imagine. The cultural expression of this bohemian neighborhood will blow your mind! Feel free to enjoy the live music and taste the gastronomic side of Ecuador this neighborhood has to offer.

Quito city gathers different cultures, traditions, and gastronomy. Declared Cultural Heritage of Humanity in 1978 by UNESCO, this city has become one of the most popular places in Ecuador. 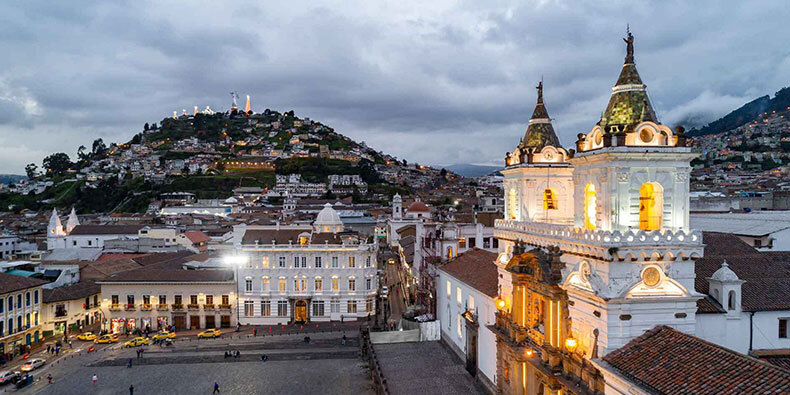 The historical center is a must-go destination since its colonial architecture and history has been preserved throughout the years. Besides history, there are many things to do in Quito such as taking the panoramic bus, going for a ride in the cable-car, doing a small trek to Pichincha, and even more exciting activities that you can easily find inside our Quito tourist guide.

These are a few not-so-popular places that will make your trip more special. There are many things to do in Ecuador that will make it your favorite travel destination. Travel with Ecuador Hop and discover them all in the safest way possible. 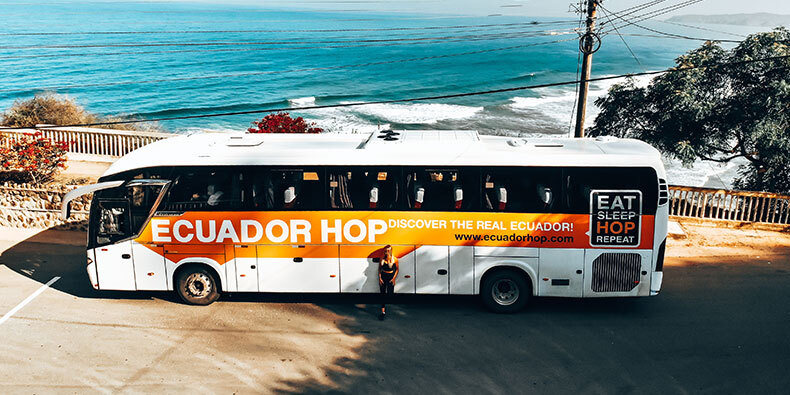