2020 Updated information about the Ingapirca archaeological complex, the largest Inca ruins in Ecuador: The history of the site and how to find the best tour for you.

The name Ingapirca is derived from two Quechua words – Inca and Pirca – together they mean Inca Wall. It is a historical town situated 2-hours outside of the Cañar in Ecuador. Known for its archeological complex and ruins, which is the largest in Ecuador. The region is a gold mine for history buffs. It is like a time capsule that takes you back to the Inca period. Surrounded by grazing llamas, verdant hills, and ancient ruins, these Inca ruins in Ecuador, Ingapirca, are extremely photogenic.

The Ingapirca ruins today are run by the people of the Cañari culture, meaning that any money does directly back into the local economy.

Inside the Inca Ruins of Ecuador

According to historic predictions based on research, the Incas arrived at the province with a plan to conquer the Cañaris. This was typical of the Incas, as you can tell from their expansive empire. The Cañaris were famous for being warriors, and so after the Incas invaded the Cañaris were forced to join the Incan army and the two cultures worked alongside each other while the Incas remained in power. This is the reason why you can clearly see architectural influences from both the Incas and the Cañaris at the Ingapirca archaeological complex.

The reason why historians know the difference between the two civilizations is their distinctive styles of construction, examples of each can be seen at the Ingapirca ruins. The Cañaris used a form of mortar to glue the rocks together, in a style similar to modern bricks and cement. The Incas cut large blocks in precise measurements so they would fit together seamlessly.

In typical Inca ruin style, Ingapirca is home to a huge network of ancient stone walls, and remnants of other buildings can still be seen everywhere you look. Some of these buildings include storage rooms, Sun Temple, observatories, and tombs. You can see all of these incredible parts of history if you take a tour of Ingapirca.

The Temple of the Sun in the Inca Ruins in Ecuador

The Temple of the Sun is the centerpiece and the most famous Inca ruin in the entire site, making it probably the most famous Inca ruin in Ecuador. Standing strong and spectacular, it remains almost intact with its huge walls and careful structures built to track the movement of the sun. They did this by positioning the temple on top of a large rock. Because of this, the Incas could track the time of year, the season, and the time of day by using the sun. The structure was also used as an observatory.

The temple was also the sacrificial site where both humans (mostly virgin women) and animals (llamas and alpacas) were offered to the Gods. Some also believe that it was used as a fortress too (although this was much later, as the Incas fought the Spanish). Surrounding the temple are colas (the storage chambers), and acllahuasi, the place where sacrificial virgins lived. You will also find a bathing area and patios near the temple.

Ingapirca archaeological complex is home to the Cara del Inca. This rock formation is said to be the reason why the Incas chose that particular site to build their famed Temple of the Sun. Allegedly, they believed that the Face of the Inca would watch over and protect them from any harm.

The face-shaped rock is visible from the temple and can be reached by a short hike from these Inca ruins in Ecuador. The stark resemblance of the rock to a human face is bound to leave you amazed. 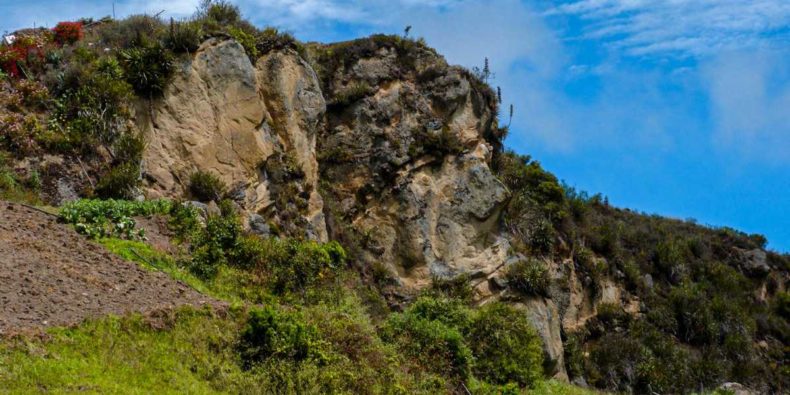 The museum is situated in the same complex and just like the ruins, it too is administered by the indigenous Cañari people. It displays an illustrative diorama of the entire site, a mummy, and several artifacts that belonged to both the Inca and Cañari civilizations. The admission to the museum is included in the entrance fee to the entire archeological complex.

Nearby Houses Amid Ingapirca Ruins

While any archeological site in Ecuador automatically becomes the property of the government, Ingapirca’s complex is still home to many indigenous families. Locals and governments believe that the houses were built to hide away Incan and Cañari treasures. There are laws protecting the houses, and so no one knows if there is any truth in these rumors.

The Ingapirca complex is one of Ecuador’s most important historical complex. Despite being partially deconstructed by the Spanish for the materials, it is still a wholly impressive place that can be enjoyed by people of all ages. Just a few hours travel from Cuenca, you can easily access this place. If you are interested in a tour of Ingapirca, then consider Ecuador Hop!