Climbing the Pichincha Volcano in Quito

The Pichincha Volcano is one of the most popular hikes in Ecuador and is located in the Pichincha province in Ecuador. The capital city, Quito sits on Pichincha Volcano’s eastern side, the volcano is easily accessible using Quito’s cable car (teleferico). The two highest peaks of the Pichincha Volcano are Ruku Pichincha (meaning “old person”) at 4698 meters, and Guagua Pichincha (meaning “Child/Baby”) at 4784 meters. Ruku is the peak that can be easily accessed from Quito by using the Teleferico, and the more popular of the two summits. Ruku Pichincha is an extinct volcano (a volcano that is not expected to explode again). Guagua Pichincha however, entered a new period of seismic activity in 1981 after 100 years of lying dormant. 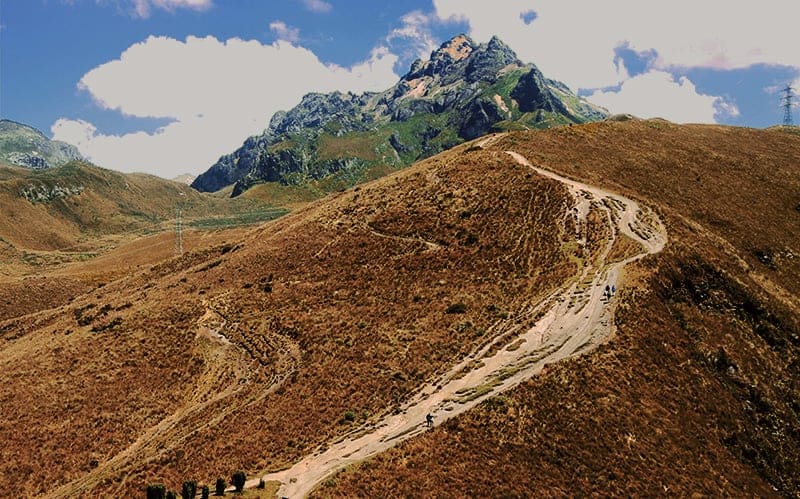 Getting to the Pichincha Volcano

The best way to get to the starting point for the hike to Pichincha is to take the Quito cable car up Cruz Loma, the mountain next to the volcano. The teleferico in Quito is the highest of its kind in South America. Built-in 2005, the cable car alone elevates you from 2950 meters to 4050 meters for just $8, taking out the longest section of the hike. The Quito cable car to Pichincha runs from 9 am until 10 pm. From here you will be able to enjoy incredible sprawling views of the city of Quito before setting off on your hike. To get to the cable car, it is possible to get a bus (just $0.25) to the base of the hill. There is a free bus that takes you from the main road to the cable car. Alternatively, you can get a taxi for just a few dollars, which will take you all the way to the base.

On the hike to the summit of the Pichincha Volcano it is very important to wear good walking boots. Ankle support will be an important part of ensuring that you have the support that you need in order to climb without injury. As with every hike, it’s very important to stay hydrated, but especially at such high altitudes, dehydration may happen faster than expected. Climbing poles may be useful as well, as the earth can be unstable and may give way underfoot, causing you to slide a few feet.

Climbing the Pichincha Volcano is a very common acclimatization hike. It is roughly 10 kilometers in length and takes around six hours to complete, depending on the experience of the hiker. Usually, the hike will take 4 hours to the peak, and another 2 returning. It is strongly advised to start as early as possible. At such high altitudes, clouds roll in at around 2 pm, and you may be caught in the fog. It is also worth noting how the way to the peak is quite sandy and the ground may be uneven. This is another reason to ensure that you have the correct shoes for the hike.

Social History of the Pichincha Volcano

It was on the Eastern side of the Pichincha Volcano where on May the 24th 1822 the Spanish/American independence war reached its climax. The Ecuadorian forces defeated the Spanish colonial army, securing the independence of the territories, right on these slopes at the Battle of Pichincha.

The very first recorded ascent of the Pichincha Volcano was in 1582 and was completed by a group of men local to Quito. Long before the idea of a cable car to take you most of the way, this was a much greater feat. Now, the hike is completed by hundreds of people each month.

In 1742, a man went inside the volcanic bulb (inside the actual volcano). He compared what he saw with the underworld. This is a brief but highly telling description of what he found. 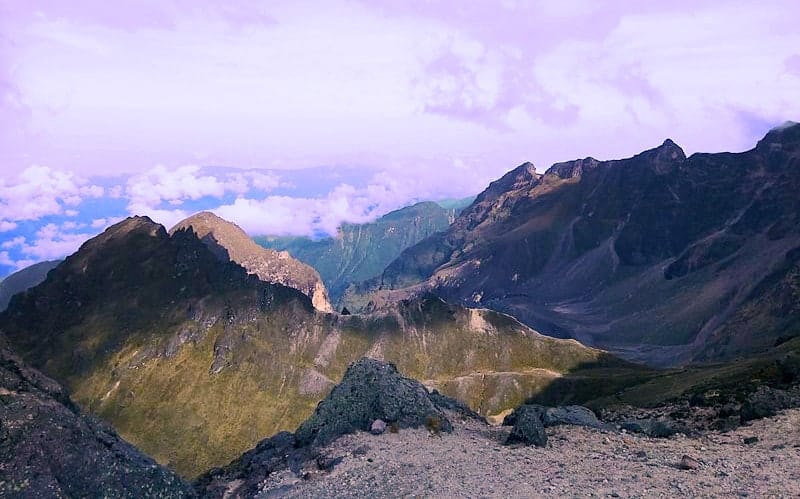 History of the Pichincha Volcano

Volcanic eruptions are measured on a Volcanic Explosivity Index (VEI), scaling from 0-8. Starting at 0, which is unrecognizable on the seismic scale and is unlikely to be noticed. Eight causes a hugely devastating effect. To put this in perspective, the last known level 8 volcanic eruption was 640,000 years ago and nearly wiped out all of humanity.

The last major eruption took place in 1660. An explosion reaching level 5 on the VEI scale. This caused ash and pumice to be blown into the air that would lie 25 centimeters deep in Quito, and reach as far as Loja (430 kilometers away). The ash being blown into the air meant that Quito would be in darkness for the eruption, which lasted 12 hours. Lava flowed down the Pichincha Volcano, but as it would happen, the peak of Ruku pushed the lava to the other side of the Volcano, away from Quito.

A pleasant hike up the Pichincha Volcano is a great way to spend a morning in Quito. The views from the cable car are unparalleled, and you can experience this attraction for a relatively low price. Once you have peaked the mountain, the endless views of the city grow larger and larger, nature and city complimenting each other as they roll.

The volcano is regularly monitored by experts so there is no need to worry about a freak eruption while you’re climbing. That being said, it is always very important to consider your personal safety while you hike. Just because a lot of people have access to it, does not mean that you should take it any less seriously. Remember your water and your boots, be sure to use sunscreen, and set off early in the morning to allow yourself the best views possible.

This volcano has a huge amount of history surrounding it. With such a rich story, you would foolish to miss this peak. A hiker or not, a large part of Ecuador’s history has happened on these hills. Discover it.