Located in Quito, the capital of Ecuador, La Basilica Del Voto Nacional is a towering grey Catholic cathedral. Found in the city’s historical center, otherwise known as ‘The Old Town’, this area was declared a UNESCO world heritage site on September 8th, 1978.

Usually referred to as ‘La Basilica’, it was built in a Neo-Gothic style like no other. Normally this architecture would not be out of place in a Spanish town across South America, but the structure was altered by the architect in order to fit with Ecuador’s roots. 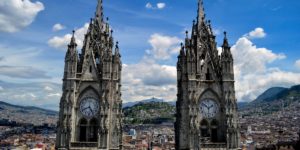 Standing at 115 meters (377 feet) tall, it’s the biggest of its kind in all of the Americas. Quito’s city center is widely known for maintaining the Spanish elements of colonial times, making the cathedral fit in well with the architectural theme of the city in present time.

The town was rebuilt at the end of the war between the Spanish and the Incas. At the time Quito was one of the last Inca strongholds. When the Inca people realized they would be defeated, they burned and destroyed anything useful to the Spanish. The Incas foresaw their defeat when the volcano Tungurahua, outside Baños, let off one of its worst eruptions in history, which they believed as a strong sign that the gods favored the Spanish.

Today La Basilica Del Voto Nacional – The Basilica of the National Vow – has become a landmark for tourists and travelers alike. It represents the amazing architecture found throughout the country, despite the structure remaining technically unfinished.

In 1883, Father Julio Matovelle recognized the need for a monument in honor of Ecuador’s devotion to the Roman Catholic church, and the sacred heart (a widely practiced and well-known devotion in the religion). After planning and presidential authorization, the Ecuadorian congress of 1884 allocated 12,000 pesos (which, unbelievably, is now worth just five American Cents) for its construction.

It was decided that the architect would be Emilio Tarlier, a French man who specialized in Neo-Gothic architecture. Tarlier already had previous experience in similar projects in Spain, so he was trusted with such an important project.

The construction of La Basilica Del Voto Nacional was no easy task. The first stone of the church was laid in 1887 and it ended up taking one hundred and one years to finally ‘complete’! Even with the blessing of the Catholic pope in 1985, the Basilica technically remains unfinished. Legend has it that when the Basilica is completed, the world will come to an end.

The 12,000 pesos (1000 pesos per month) originally designated to the basilica’s construction was far from sufficient. This meant that the church needed to come up with other ways of generating funds. Donations of stones for the building were accepted during these times. It was promised that upon the churches completion, the names of those who donated would be carved into the stones. Still financially insufficient, the state even went as far as introducing a salt tax to provide the project with further funds. 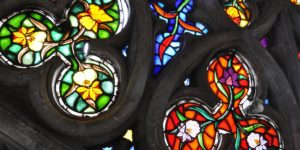 The beautiful basilica is one of, if not the most impressive piece of Neo-Gothic architecture in existence and the largest in all of the Americas, reaching a height of 115 meters at its tallest points.

Although the architecture style originated in Europe, the French architect Tarlier ensured that La Basilica Del Voto Nacional fairly represented Ecuador. He did this with the inclusion of grotesques in the form of animals native to the Galapagos Islands, pride and joy of Ecuadorian culture.

Animals ranging from tortoise to armadillos can be seen throughout the building’s exterior. There is also much gold leaf in the interior of the church, with countless different statues, shrines and stained glass windows depicting various religious figures. Unfortunately, photography is prohibited like in many other churches around South America.

Entry to the basilica’s sanctuary will cost you the small amount of $2 which allows you to visit some rooms of the church. A further $2 – ($4 in total) will give you access to the rest of the famous church. Visitors are even allowed to climb to the top of the basilica’s towers. We strongly recommended to splash out a little and pay the extra cost. The view from the glass window is simply stunning, giving a panoramic view of all of Quito.

This in itself is something not to be missed out on. But once you have the opportunity to climb the ladders to the top of the bell tower, you’ll be amazed. 360 degrees of sprawling city landscape, viewed between two spires of phenomenal architecture from where you’ll see… everything. El Panecillo, similar to the Christ the Redeemer in Rio, sits between the two clock towers, and the mountains guarding the city from either side. You may have seen cities from above, but you’ve never seen one like Quito before.

Quito’s La Basilica… Is It Worth It?

La Basilica Del Voto Nacional is one of Ecuador’s most iconic attractions and a must-do when in Quito. We would recommend giving yourself an hour or two to explore the church, where you can mix this time to also walk around the historic center.

For only a small cost you can get an spectacular view over the country’s capital. Sat almost directly in the center of this banana shaped city, we cannot stress enough that it should not be missed. You’ll get the chance to learn about the capital’s history while admiring the beautiful design of the church!