The Swing at the End of the World in Baños

2021 Updated Information about the Casa del Arbol and the Swing at the End of the World. Discover the history and the best way to visit this landmark.

Arguably the most famous treehouse in the world, the Casa del Arbol is home to the Swing at the End of the World, a simple playground ride perched on the edge of a mountain overlooking Baños, Ecuador. Here, you can hold the ropes as you jump over the mouth of the cliff. Don’t get scared, this is just childhood fun on an adult scale. On a clear day, it is even possible to see the active volcano sitting just outside of the town, occasionally breathing out enough smoke to remind you of its existence.

La Casa del Arbol (which translates to “The Treehouse” in English) was originally built to house a seismic monitoring system to detect nuclear explosions, earthquakes and other potential disasters, both natural and manmade. There are a total of 170 of these seismic stations in the world spread across 76 different countries.

The Casa del Arbol itself was also originally built as a watchtower for the nearby volcano, Tungurahua, which is active. Some years after it was built, the Swing at the End of the world was hung from its branches, overlooking the beautiful Ecuadorian Valley.

Sitting at the bottom of the valley, between the volcano and the hill with the swing, the town of Baños lays. Baños has become a hub of activity for adventure seekers, lovers of the outdoors and backpackers. With incredible things to see and do all over the town, from the Ruta de las Cascadas to the Pailon del Diablo, there is something for every traveler. The Swing at the End of the World is definitely one of the top must-visit places for anybody who’s traveling to Baños.

The Story of the Swing at the End of the World

Originally built by a grandfather living on the hill to monitor the machinery in the Casa del Arbol, the story tells that he built the swing in an effort to encourage his grandchildren to visit him high on the hill. The swing gained worldwide attention when a video of one of the children swinging over the drop went viral.

It may make you a little sad to think of the lonely old man, guardian of the seismic monitoring system, using the Swing at the End of the World to tempt his grandkids to visit him in the clouds, but don’t worry. The ploy worked and they visited almost daily. These days, the swing provides happy memories for friends, solo travelers, families, and strangers in passing.

You may wonder why you would bother with heading all the way up a mountain just to play on some playground equipment. After all, there is a reason you stopped swinging when you were a child. But 2600 meters up, that rush you felt when you were five will soon come rushing back. Most travelers are chasing freedom. There is nowhere else in the world that you will experience this feeling. If you don’t wish to take on the extreme hike to the top of the mountain then passengers of Ecuador Hop can take part in a tour from Baños.

Visiting The Swing at the End of the World

While technically on more of a steep hill than a cliff, the Swing at the End of the World might still seem somewhat intimidating. Luckily the swing has seen a couple of upgrades over the years, of pretty much everything.

The swing itself has a backrest, and a sort of ‘seatbelt’, (another piece of rope with a carabiner to clip you in). The ropes are highest-grade climbing ropes, which are no longer attached to the branches but rather a strong metal pole in the tree.

All of Ecuador Hop’s day trips from Quito to Baños include a visit to the Swing at the End of the World in the price of the ticket, as well as so many more unforgettable stops along the way. 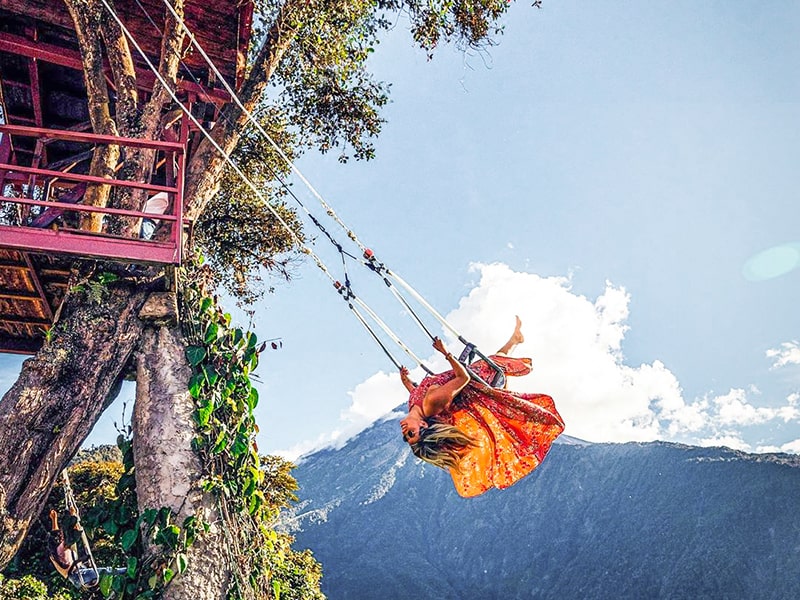 If simply swinging over a 1.6-mile deep valley isn’t enough for you, then good news! Since the active volcano, Tungurahua sits in full view, sometimes you will get lucky and you’ll be able to see it blowing smoke. The last (minor) eruption of Tungurahua was in 2014. If this is a deal-breaker for you, then it’s best to check before going up the hill. Since the volcano is so big, it commands its own weather patterns so even if the sky is clear in Baños, once you get to the top of the hill the peak may not be visible.

Tungurahua itself actually holds a lot of interesting history. The name originates from Quechua (the language of the Incas). The Incas worshipped nature and the Pachamama (mother earth). During one of their final battles against the Spanish invaders, Tungurahua violently erupted. To the Inca, this was seen as a sign of imminent defeat and prompted their retreat.

More than just the swing, the treehouse, and the natural mirador of Tungurahua are incredible. Go up and check out the views from there. There is also a small cafe on the hill, where you can relax and enjoy a hot chocolate (or chocolate caliente in Spanish) and an empanada before going out for another go on the swing.

Getting to the Swing at the End of the World

Take the tour with Ecuador Hop. This option is cheap, reliable, and fits right in with the bus’ schedule. Get driven right up to the top of the hill with your other travelers, and swing to your heart’s content.

After you have had your fill, you head back down to the town in time to catch up with your next leg of the journey. Alternatively, on Ecuador Hop’s schedule, you can stay around the town and check out all of the other things Baños has to offer (and there is plenty!). The bus is flexible and allows you to do what you like when you like to do it.

If you don’t want to take a tour to the top of the hill, then you can walk. It is a semi-tough hike, roughly 11 kilometers uphill. This is a great way to turn the Swing at the End of the World into a full-day excursion. A slightly more palatable option if you like to walk but don’t like the sound of ‘uphill’, is to take a tour up and walk back down. But ensure that you are headed in the right direction, and check what time the sunset is! Baños is widely regarded to be a town that is safe from petty crime, but much of the walk is on roads traveled by cars.

The town of Baños is full of history, wrapped up neatly in wonderful rolling hillsides of green and waterfalls. See it all from above as you visit the Casa del Arbol and swing from the swing at the end of the world. We recommend spending several days in Baños so that you can really experience the truly incredible things that there are available to do in this town.

This hill holds so much history, and so many sights to be seen. The chance to see all of this from the Swing at the End of the World is a once-in-a-lifetime experience. Don’t just take the picture. Swing the swing.