Mitad del Mundo: Visiting the Middle of the World

Sitting right in the center of the Northern and the Southern Hemisphere, the Mitad del Mundo is truly the middle of the world. It is literally a place like no other! After all, where else can you stand with each foot in a different hemisphere?

If you think that the equatorial line is all there is to Mitad del Mundo, you couldn’t be further from the truth. From humongous monuments to cool model villages, interactive museums, and markets, there is a lot to discover at the Mitad del Mundo, and it’s a great way to spend a day in Ecuador.

Ecuador has some great news!

Ecuador is OPEN again after a huge drop in covid-19 cases! To ask our team about any question regarding Ecuador travel contact us here.

Remember, when traveling around Ecuador, Ecuador Hop is the only company offering flexible date changes until 2024 at NO extra cost. No airline, bus company or tour company offers such flexibility, on top of our stringent covid-19 protocols and safety procedures.

Visiting the Two Equators in Ecuador… but which one is the Mitad del Mundo?

Although one of the sites is techincally the center of the world, the monument that marks the wrong point is what is named the Mitad del Mundo.

Yes, there are two different places to see the equator! An interesting fact about the Mitad del Mundo is that the original monument was erected in the wrong place. The original or first equator was marked by Charles-Marie de La Condamine in the year 1736. He pinpointed the Middle of the World in the days when there were no GPS systems, so it’s still somewhat impressive that he missed by just 240 meters.

This is the ‘equatorial line’ that is marked by the huge Monumento de la Mitad del Mundo. It is a large monument with a globe on top, and a museum explaining how the line was marked back in 1736. 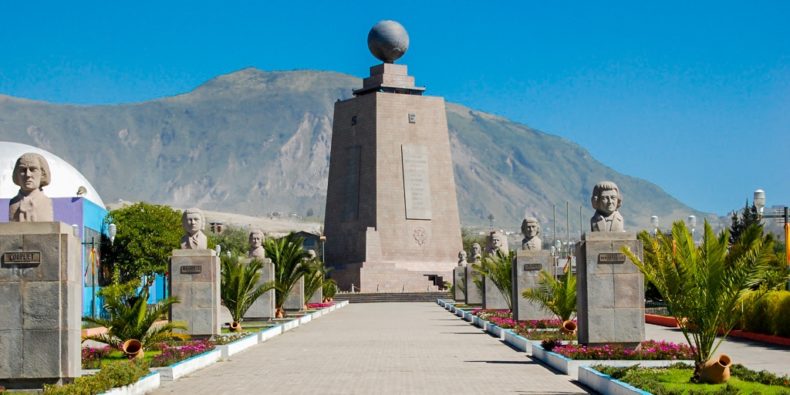 You have to pay to enter the park, but there is plenty to do once inside including restaurants, a small market with souvenirs and trinkets, a place to get your passport stamped with souvenir stamps. The museum inside the monument is dedicated to interactive exhibits and an explanation of the history of the monument and the equator itself. You can even climb the monument and take in the view from the top.

The Museum at the Center of the World

The Mitad del Mundo is 30m high and is home to the famous Museo Etnográfico or Ethnographic Museum. It contains a ground floor, nine more levels, and then a lookout point.

There are enough exhibits, history, scientific tests, and photographs on display to keep you busy all day. Some of these artifacts represent indigenous customs, rites, and rituals. Others represent the scientific experiments that prove this is the center of the hemisphere. 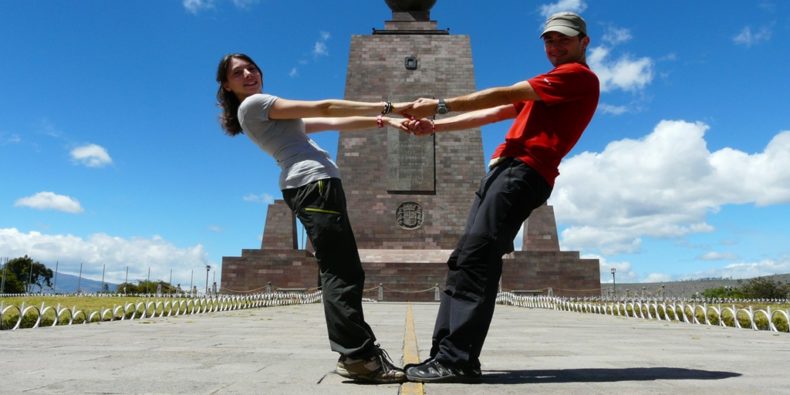 On the top is the Observation Deck aka viewpoint. As you reach here, you will be welcomed by a clear view of the Andes, Cayambe, and surrounding hills.

How to Stand Between the Northern and Southern Hemispheres

Despite the fact that yes, technically the iconic bright yellow line doesn’t represent the REAL equator, it is still a great place to get pictures and strike a pose.

Exploring the Rest of the Equatorial Park

The equatorial park boasts more than just the monument and the yellow line. It also has a model village called the Viviendas Ancestrales exhibition. These ancestral homes are a re-creation of traditional dwellings from three of the regions of Ecuador- the Andes, the Amazon, and the Coast In addition to the model traditional village, the park also includes a 1:200 scale model of colonial Quito, so you can see the whole city at once!

Just around the corner from these exhibitions is the Museo de Cacao or Cocoa Museum, which outlines the history of cocoa in Ecuador, and the Museo de la Cerveza Artesanal or Craft Beer Museum, and also a planetarium for those who wish to learn a little about the plant life of Ecuador. 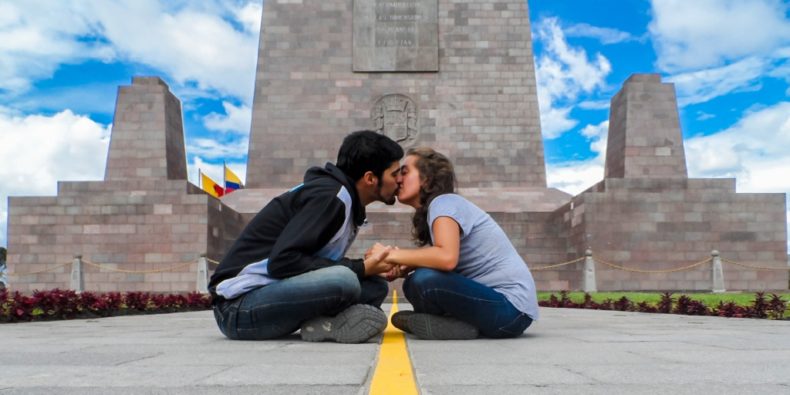 When you leave the equatorial park, take a left along the road in the direction that is slightly uphill. It is not well signposted, but it is a short walk, so carry on with faith. When you see the Museum Intinan sign, take a left, and follow the short dirt road. Here you will find the real equator at 0° latitude. You will also find another, a smaller museum, and another, smaller line.

While the real equator doesn’t have a huge monument or the enormous iconic yellow divide, it does have plenty of interactive displays and exhibits, including the famous “balancing an egg”, theoretically only possible on the equator (but difficult, even there), and demonstrations of the different direction of water drainage. This is fun and interactive.

There is also an open plan museum that shows real-life examples of tribes that lived in the area previously. This even includes a replica of an Inca style ‘bar’. You will even find precious items such as totem poles, shrunken heads, and the dead body of a giant snake.

You can even try your hand at traditional tribal blowpipes used to shoot arrows. During the weekend you can experience some performance art in the form of live music and traditional style dances. 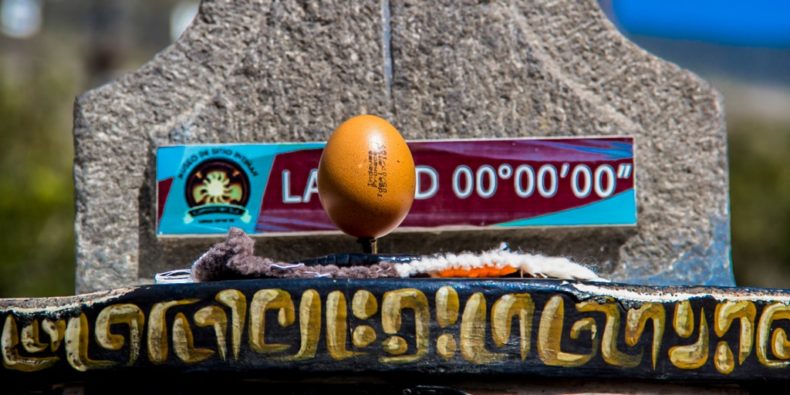 How to Get to the Mitad del Mundo: Tour, Bus or Taxi?

There are several ways to get to the Mitad del Mundo from Quito. You can take a tour that starts from the city, which runs from multiple tour groups and lasts for around half a day each. These tour groups mean that you will see everything that is available to see, and more often than not, more or less all of the costs will be included (we recommend checking this with your tour operator, as what is included varies from tour to tour). We have found that this is the best tour for price and value for money.

You can take a public bus to the monument, while this is without a doubt the most time-consuming means of travel taking well over 2 hours, at $0.25 a bus, it is also without a doubt the cheapest. In order to get the bus here, you will need to first catch the bus to Ofelia station. Quito has a very comprehensive bus station with signs and maps at every stop.

Since Ofelia is one of the main bus stations in Quito, it will be clearly written on the front of a bus. If you need to change lines to get on the right line, We suggest asking at your hotel or the bus driver. Use this phrase to help: “Donde cambio por Ofelia?” (Where do I change for Ofelia?).

Once you arrive in Ofelia, ask your bus driver to again point out the bus for the Mitad del Mundo. There are plenty of buses with signs, but not all of them visit the monument. By asking, you can be dropped off directly outside the park. If you opt for the bus, make sure that you leave as early as possible to avoid being stuck out in the dark on your way back home.

Your final option is to take a taxi. A taxi will cost anywhere between $10 and $20, depending on both your Spanish and your haggling skills. It will also drop you off right at the door and will take an awful lot less time than the bus, as it will take the faster route around the city. It also won’t stop lots of times on the way, so that’s a bonus.

Often when visiting places outside of the city, you can be tempted to ask the driver to wait for you. There’s little point doing that at the Mitad del Mundo, as there are usually plenty of taxis around. If not, wait patiently at the roadside and flag one down. It’s a busy road so you shouldn’t be waiting for too long.